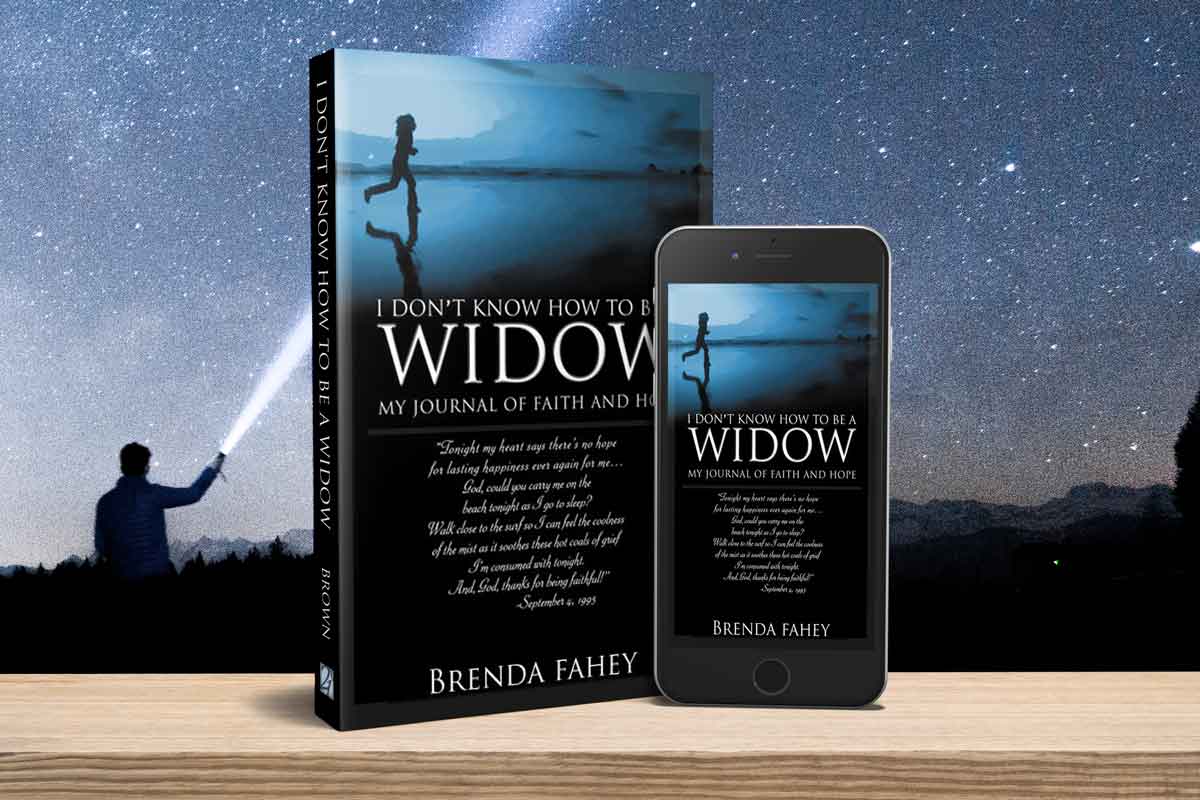 What do you do when your world comes crashing down around you?

After graduating from high school in Campbellsville, Kentucky, Brenda went to work for the FBI in Washington, D.C. She met and married her first husband, Ron Fahey on September 21, 1968.

On March 20, 1995, Brenda’s life took a sudden turn when she returned home from work to find that Ron had died suddenly. The journal that she began that night not only includes the two years after Ron’s death but also covers the loss of Billy, her second husband, in March of 2002.

I Don’t Know How to be a Widow: My Journal of Faith and Hope, has been called “timeless.” We all have (or probably will) suffer the loss of someone we cherish. Brenda’s journal shows that God’s grace and mercy are new each morning and will never fail.

Brenda’s speaking is full of faith, hope, and lessons learned (such as the value of maintaining a good sense of humor.) She does all she can to follow in the footsteps of one of her favorite biblical characters, “Barnabas.” But, as Brenda says, “I can’t be a ‘Barnabas’ cause I’m a girl…so just call me ‘Brendabus.’”

HOW DO YOU SURVIVE THE LOSS OF THE ONE DEARER TO YOU THAN ANY OTHER ON EARTH?

I kept saying these words the night Ron died.

I just couldn’t imagine myself a widow. The night Ron died I began doing what came naturally – journaling. As time went on I began to share my journal with others; many suggested that I get it published.

Ron and I had a wonderful life together. Ron was a great husband and father AND he was a great confidant, friend, and protector for me. (Okay! Let go of my arm! He was human – he had some faults too!) Ron loved the Lord and we loved being in church together.

Go with me as I open the door that spring evening to find my life forever changed. Find out what day to day living is like without the one closest to me to share it. See the spiritual journey that Ron’s death took me on and how I’ve won victories (and recovered from some losses) with the power of God shining through. You’ll see how laughter was a part of my survival and how God had given me some very special blessings to help in the days that would follow March 20. Learn how I handled making decisions (big and small), how to budget, holidays, being followed by someone I didn’t even know and so much more. You’ll find more of a story of how I’ve survived than a “how you should do this” book. I’m still in school on the subject of how to be a widow. Please remember this is a journal and it’s written as such. All the grammar and words may not be “correct” but to change everything would take away from the way the feelings and thoughts flowed.

I found a new appreciation for eagles in the second year. One of my favorite verses in the Bible is one that God showed me when Ron was out of work for several months before we moved to Indiana.

“But they that wait upon the LORD shall renew their strength; they shall mount up with wings as eagles; they shall run, and not be weary; and they shall walk, and not faint” (Isaiah 40:31).

I had heard a lot about the valleys and mountain tops but never heard anyone talk about soaring like the eagle. The freedom that comes from the passage of time and of the lessening of the deep, unrelenting Grief really helped me feel like a soaring Eagle. Things are clearer ~ easier to see from the vantage point of the Eagle. Eagles and Angels ~ they both fly. I think about the flight Ron took the night he died. I think about my journey as a flight ~ on the wings of an eagle!

I don’t know how many angels came to our home that night. God, in His infinite wisdom looked down from Heaven and said, “Ron, my son ~ come home.” There was no arguing (as he’d probably done with his earthly Father as a child). He didn’t respond, “Oh, Dad, in just a minute.” No, there was no hesitation or bargaining. He simply said, “Yes, Father,” and went Home. That’s when God must have held up His hand as the angels began to rise to carry Ron Home. As He instructed some to continue with Ron He knew what I was to face just a short time later. I’m convinced that He must have left angels behind to minister to me. Again, I don’t know how many but there had to be more than one because I was cared for so gently, so lovingly ~ and so very completely.

I can’t tell you that I saw the angels. I can’t even tell you that I felt their presence, but isn’t this the only thing that makes sense? How in the world could my focus at that moment be on heavenly things? I remembered praying for God to be glorified. A couple of years later, in a casual conversation my closest friend, Jan told me I had called her after calling the paramedics and asked for her to pray for me not to dishonor God in this but to bring Him glory. What I thought was a prayer had been a call ~ a reaching out to a friend I knew I could count on to pray for me. Scoff if you will, but I believe in angels!!! And, they continued to care for me into the second year.