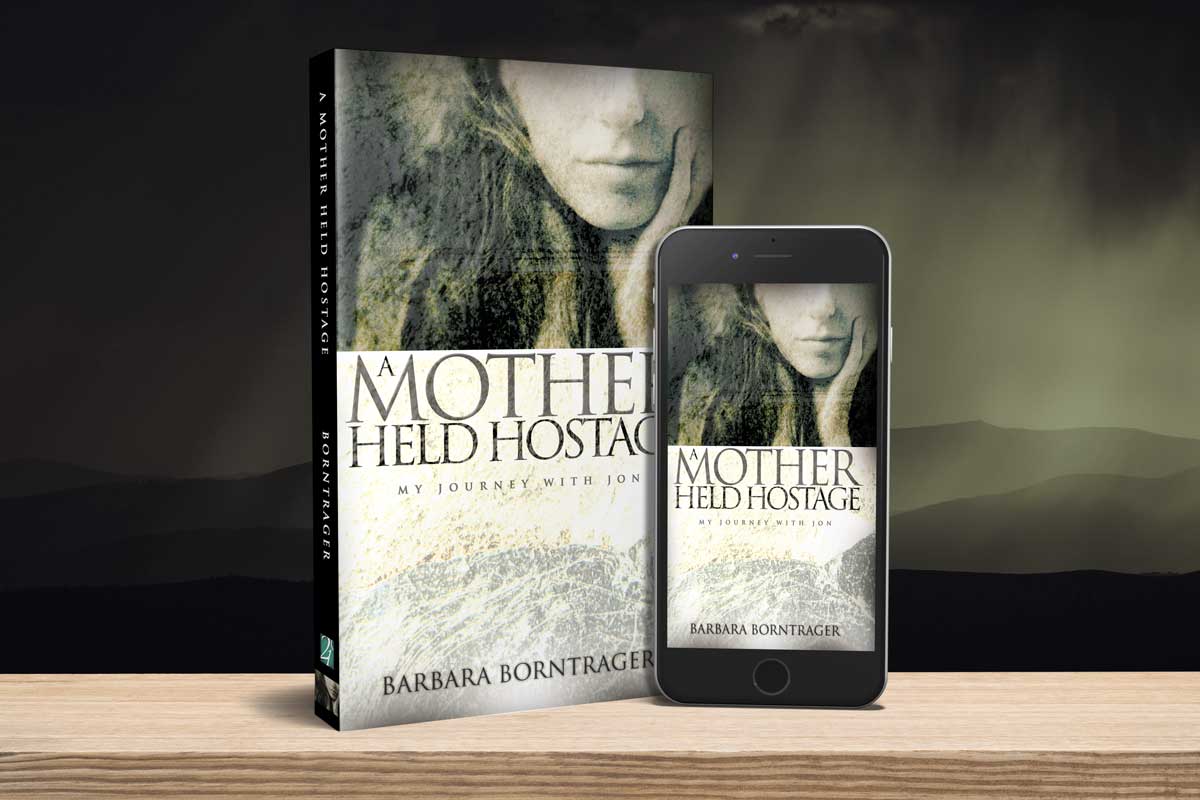 This book is for mothers and caretakers of special needs children who struggle with doubts, guilt, and crushed dreams. I survived, and you can too!

This never began as a book to be read by others. I have journaled off and on most of my life, especially at high and low points. Writing my feelings out sometimes helps me sort through and understand a situation. I’ve also written lots of meaningless chatter. I believe the saying, “Thoughts disentangle themselves over the lips and through the fingertips.”

The busyness of daily life as mom with three active growing sons often crowded out time to meditate, think, and record. Nevertheless, maintaining a journal remained psychoanalysis of sorts for me to turn to from time to time.

Our first two sons, Jeff and Brett, were born a year and a half apart in age, and fast became best friends and buddies. Four years later Jon joined the family. My husband Jonas and I soon realized that raising him would take much more energy, time, ingenuity, and resources than the other two needed. Jon was born with a neurochemical imbalance called Tourette Syndrome, evidenced by repetitive movements and vocalizations, tics, impulsiveness, and distractibility.

As a family we managed to cope fairly well. The five of us worked and played together during the growing up years. We traveled and camped together. We attended many county league, junior high, and high school sports activities, cheering for each of the boys in turn.

Jeff and Brett graduated from high school and within one year, both had left for college. Jon missed his older brothers. We all missed them. Jon was now in ninth grade and facing new pressures and challenges in high school, which oftentimes seemed overwhelming to him. It was at this time that I began writing about mothering a special needs child.

Availability: Usually ships in 24 hours
Ships from and sold by Amazon.com

Barbara Borntrager is a wife, mother, part-time chaplain, and speaker. She taught in the public schools in Virginia for fifteen years and is currently employed in public relations with an insurance company.

“In a compelling story of family crisis, Barbara Borntrager shows us that grace hides behind the disguise of human suffering. With rare honesty and fresh prose, she gifts her readers with an experience of raw emotion and gives insight into the question that haunts us all when we find ourselves in the dark: Does a loving God have plans for my pain?”

best-selling author of Could I Have This Dance?

I Know What It Is:

To observe your child. To note that he is different than the others. His behaviors are often irrational, unpredictable. To wonder and worry and visit various doctors, and hear a pediatric neurologist call it a neurological disorder you never heard of—Tourette Syndrome.

To see your child develop tics in his face, uncontrollable muscle spasms moving around in other parts of his body.

To see your child’s eyes roll up into his head and stay there and his head jerk violently from these neurological disorders which he cannot control.

To have a young child—six, seven, eight years old—ask you why God did this to him,

“I hate me and you must hate me too and God does too or he wouldn’t have done this to me.”

To pray and believe for healing, only to see the situation worsen.

To have friends reject, make fun of, or simply to ignore and not include him—both non-Christian and Christian friends—because they don’t understand. No one does.

To live with an angry child who hates his illness and himself and takes it out on those he loves most—especially mom. The Doctor says, “Take it as a compliment. He knows you won’t leave him like all the rest.”

To lie in bed with a teenager as he sobs uncontrollably for an hour or more. For him to ask, “Why must I live? Why must I be different?”

For him to tell you how he goes to the bathroom in middle school where no one sees him, to cry.

To lie awake all night in prayer, worrying over a troubled teenager.

To pray and read scriptures at midnight by his bedside, while massaging his tense, jerking back muscles.

To look at his quality of life and hear him say, “If THIS is life, then death would be better.”

To receive repeated phone calls from the school that your child is not paying attention; he is disturbing others and acting out in inappropriate behaviors. (This same child is multi-talented and tested into the Gifted Education Program.)

To educate myself on Tourette Syndrome and Attention Deficit Disorder and observe the repetitive behaviors, obscenities, impulsivity, distractibility, and high energy.

To feel the expectations and crushed hopes of trying new medicines, as they alter the personality of your child and reduce him to lethargy. (He’s tried ten in the last seven months.)

To observe the painful side effects of medications, the total body tremors, nausea, and sleepless nights they cause.

To see him turn to illegal substances as a way to forget and block out the pain. And then to see him become withdrawn and angry and suspicious, living out a lie lest we parents find out.

Setting limits, making rules, and having them pushed to the maximum and beyond. That unpredictable behavior that leaves you walking on eggshells, lest whatever you say or do causes his boiling volcano to erupt.

Fearing the unknown. Beginning to know, but having no proof.

Hearing your child talk of wanting to die, and you talk life to him. But with him you feel his desperation.

Seeing the marks of a knife on his arm, the dark look on his face.

Experiencing the panic over satanic heavy-metal music, copying the suicide lyrics off a tape, discussing them with your child.

The helplessness when he talks of suicide and just how he would do it.

Committing your child to a psychiatric hospital for extended periods of observation and counseling.

Receiving a call from the Emergency Room at the end of a busy day of teaching, entreating you to come immediately and bring all the medicine bottles. It was an intentional overdose.

Standing vigil at his bedside with all the vital sign monitors blinking and calling a child back from a deep sleep and death wish to life—life that is yet another round of doctors and medications and rejections.

Watching that child’s hope flicker and gradually get weaker as the cycle is repeated.

Finding a suicide note and marijuana hidden in your child’s room.

I Know What It Is:

To know that I can’t criticize or judge others in their pain or sin, because I don’t know!

I don’t know what they face and are forced to live with.

I don’t know the battles they must fight daily to live life which I just take for granted.

To understand that sometimes the struggle is too great, the rejection too painful, that the spirit is willing but the flesh is weak, and in a desperate moment, they have been overcome. That doesn’t mean it is right—but I understand.

To lean on the Rock, Christ Jesus. I stay on the Rock. I stand, I sit, I fall, I stretch out, I grasp the Rock. Whatever, I stay secure on Him although rains descend, winds blow, and I am beaten.

To need space. To feel overwhelmed with the pressures of life. To feel controlled by the needs of another.

To leave. To get into the car and get out. Just to be alone. To drive over the West Virginia mountains. Then to end up at a doorstep, collapsing into the arms of a friend in tears. To cry your heart out with a safe friend.

To pray healing scriptures over your child. To believe God for healing. To have him improve, then have all hell break loose again.

To find the empty bottle, again, in the trash can. To be home alone this time. To go to battle with the enemy over the life of your child. To cry out “Jesus! Jesus!” To have the death spirit lift.

To live with the on-going struggle that continues as you vacillate between reaching out for support and prayer from friends, and then not calling. Not wanting to be a burden to others. And walking on alone, with God, through the desert storm.

To hurt, and hear other’s hurts, and to smile and honestly be able to quietly say, “It is well with my soul.” To know that THAT makes no sense at all. But it’s true.

To discover the defective gene in other relatives of your husband, and to be angry with your husband and wonder why you married him.

To grimace, and wonder, if only…

And then the guilt—of course, it wasn’t his fault either.

And the backlash of reminders of all my own faults and imperfections that he has to live with.

To have your husband hold you, weep with you, pray with you, and reaffirm that nothing, nothing will tear you apart.

To have no words or prayers or resistance left in you, but to be mute before God. And to know, down deep, that He is sovereign.

To be at the altar on Sunday morning. Often. To silently affirm on the way to church one morning, “This day I am well and fine. Life and God are good! This morning I will NOT go to the altar. Regardless of the message, today I am well!”

And then when the invitation is given, to know again that God has spoken, feeling the tears, and in obedience, there I am again, knowing the love and support of God through Godly friends, acknowledging my own weakness.

To resent being controlled by another who is out of control.

To be furious with red-hot anger that he has stolen your life.

To hate your child. To hate what he does to you.

To come home to him cooking a peace offering supper for the family, after his angry tirade of hateful words the night before.

To not know what the future holds, but to be at peace, because I know WHO holds the future.

To hear God’s voice repeatedly, even in the worst of times, saying, “I am in control. All is well.” And knowing that the peace beneath the turmoil makes NO HUMAN SENSE.

To know this is obviously for His glory, regardless, simply because it makes no sense.

To lose my own health because of the stress and pressure. To experience TMJ surgery, panic attacks, loss of weight, loss of sleep, discouragement, depression, dizziness, and all day nausea.

To take a risk in obeying God—doing the unusual and unpredictable and uncomfortable. To leave a good, secure job which I enjoy. It makes no financial sense, no professional sense. But to “get out of the boat” anyway, as Peter did when he walked on water, because Jesus bids you “Come.”

To stay at home 24 hours a day to teach and nurse your high school age child.

To devote your days to the care of a teenager who is confused and out of control.

To not have life turn out as you would have chosen, but to know deep down beneath the pain that you’ve found God in ways you never knew possible when life was smooth.

(Written when Jon was 15 and shared at a Women’s Retreat in the session, “Learning to Live with Disappointment.” Jon had just returned home from the hospital after an intentional overdose.)